Showing posts from December, 2011
Show all

By kimberly ann josephine - December 27, 2011
Earlier, I tweeted my New Year’s Resolutions. Please let me begin by saying that I am not big on these things. I’ve never aspired to lose weight, just gain it (don't be a hater.) I don’t have some horrible habit to kick (oh, except wasting time on the internet, but, let’s face it, that’s never going to happen.) And finally, I already recycle, eat healthily, have a decent job, and pay my bills on time. All in all, I am a stand-up citizen. But this year, well, I fear that I’m falling into a pattern. I’m not big on patterns. They bore me. I like shirts that lack symmetry, for example. Also, I have three holes for earrings in one of my ear lobes and two in the other. I only ever use one of each, but that’s not the point. The point is, I need to step it up. I should probably resolve to not be on the internet as much, but I need the internet for school, so there goes that for breaking up the monotony. Tumblr, Twitter, Facebook & Gmail, don’t sweat it, I’ll still be visiting. Da
Post a Comment
Read more

Exciting Things in the Mail 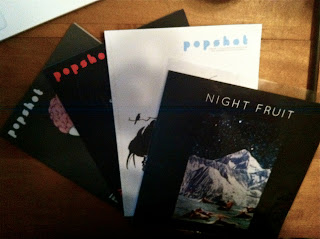 Today, when I got home from grading papers at Ultimo , two packages were waiting for me in the mailbox. Like Darla Jackson , I love receiving mail. I love sending mail, too. But we'll get there. Often, my mailbox is full of advertisements and bills. I'm still happy when I see my name on the envelope, but I was happier today with what was in that mailbox than I have been for awhile, First, I took advantage of a deal on litmags and bought the first three issues of the UK journal Popshot for a discounted rate. Boy, am I glad I did so! The mag's "byline" is "Poetry & Illustration", and it delivers as promised. Each issue is an accessible amount of pages. There's nothing like a compact, well done lit journal, in my opinion. And the art is fabulous. I am into lit journals that value their artists' work in the same way that they value their writers' work. Each issue also has a theme, but from flipping through the three copies I have, its them
Post a Comment
Read more
More posts