Showing posts from November, 2011
Show all

I Re-Read Slaughterhouse-Five to teach it.

Slaughterhouse-Five by Kurt Vonnegut My rating: 5 of 5 stars Teaching this book to my Experiencing Literature students at Rowan has truly given me a new perspective on its greatness. I was almost moved to tears addressing the class after we read through chapter 6. We were having a discussion on what a certain passage meant, on how the Tralfamadorian point of view was un-human, how things aren't "stuck in amber" and how we CAN do something to "change the world"-- "do you think Vonnegut thought he could 'change the world' when he wrote this book?" scattered nods and shaking of heads, scattered yeses and nos and idon'tknows. "Does it matter?" No. Even if it is only a little piece of the world around us that we have a positive effect on, it's worth it. Even if our idea of "changing the world" into a more positive place to live only involves encouraging others to read and learn from books like this. It was a gross ove
Post a Comment
Read more

Events You May Have Missed 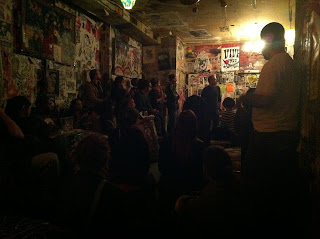 A lot of good things happened over the past week and a half-ish in Philadelphia, and I missed a lot of them. Barrelhouse had a reading at Temple. It apparently went well. I was napping on my couch with a headache, and I slept until about 4 (it started at 3:30.) Literary Death Match came to the World Cafe. I was at the horrific game that the Eagles played against the Chicago Bears. They lost in the fourth quarter. I shunned one death match for another: the Eagles' playoff hopes are all but dead after today's loss against the Arizona Cardinals. ...Because I watched that game at my Dad's house, I also missed a reading this evening. Asher Lewis invited me to a reading at the Walking Fish Theater that I should have gone to. Football: 0, Literature 2. Kimberly: 0, Literature: 3. Okay. Wait. I need to fix that score. I DID go to the Tirefire Reading Series at the Tattooed Mom on Thursday night, which was pretty damn great. I at least have one point. Mike Young, who I tau
Post a Comment
Read more
More posts